A new camera can photograph you from 45 kilometers away.

Developed in China, the lidar-based system can cut through city smog to resolve human-sized features at vast distances.

Long-distance photography on Earth is a tricky challenge. Capturing enough light from a subject at great distances is not easy. And even then, the atmosphere introduces distortions that can ruin the image; so does pollution, which is a particular problem in cities. That makes it hard to get any kind of image beyond a distance of a few kilometers or so (assuming the camera is mounted high enough off the ground to cope with Earth’s curvature).

But in recent years, researchers have begun to exploit sensitive photodetectors to do much better. These detectors are so sensitive they can pick up single photons and use them to piece together images of subjects up to 10 kilometers (six miles) away.

Nevertheless, physicists would love to improve even more. And today, Zheng-Ping Li and colleagues from the University of Science and Technology of China in Shanghai show how to photograph subjects up to 45 km (28 miles) away in a smog-plagued urban environment. Their technique uses single-photon detectors combined with a unique computational imaging algorithm that achieves super-high-resolution images by knitting together the sparsest of data points.

The new technique is relatively straightforward in principle. It is based on laser ranging and detection, or lidar—illuminating the subject with laser light and then creating an image from reflected light.

The big advantage of this kind of active imaging is that the photons reflected from the subject return to the detector within a specific time window that depends on the distance. So any photons that arrive outside this window can be ignored.

This “gating” dramatically reduces the noise created by unwanted photons from elsewhere in the environment. And it allows lidar systems to be highly sensitive and distance specific.

To make the new system even better in urban environments, Zheng-Ping and co use an infrared laser with a wavelength of 1550 nanometers, a repetition rate of 100 kilohertz,  and a modest power of 120 milliwatts. This wavelength makes the system eye-safe and allows the team to filter out solar photons that would otherwise overwhelm the detector.

The researchers send and receive these photons through the same optical apparatus—an ordinary astronomical telescope with an aperture of 280 mm. The reflected photons are then detected by a commercial single-photon detector. To create an image, the researchers scan the field of view using a piezo-controlled mirror that can tilt up, down, and side to side.

In this way, they can create two-dimensional images. But by changing the gating timings, they can pick up photons reflected from different distances to build a 3D image.

The final advance the team has made is to develop an algorithm that knits an image together using the single-photon data. This kind of computational imaging has advanced in leaps and bounds in recent years, allowing researchers to create images from relatively small sets of data.

The results speak for themselves. The team set up the new camera on the 20th floor of a building on Chongming Island in Shanghai and pointed it at the Pudong Civil Aviation Building across the river, some 45 km away. 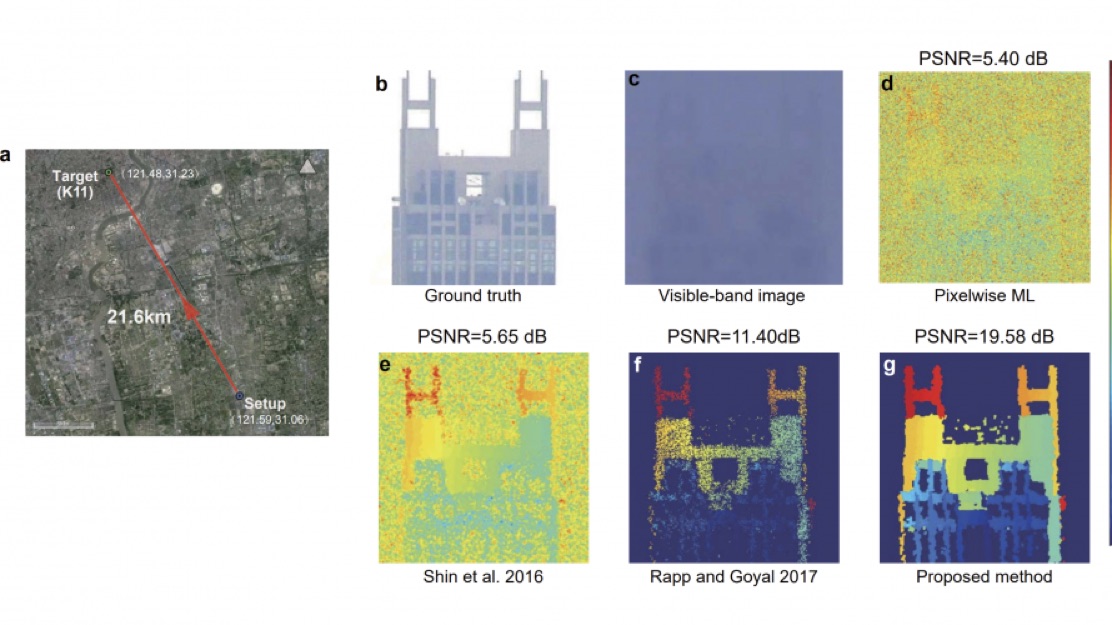 Conventional images taken through the telescope show nothing other than noise. But the new technique produces images with a spatial resolution of about 60 cm, which resolves building windows. “This result demonstrates the superior capability of the near-infrared single-photon LiDAR system to resolve targets through smog,” say the team.

That’s also significantly better than the conventional diffraction limit of 1 meter at 45 km, and certainly better than other recently developed algorithms. The image here shows the potential of the technique in images taken in daylight from a distance of 21 km. ”Our results open a new venue for high-resolution, fast, low-power 3D optical imaging over ultralong ranges,” say Zheng-Ping and co.

That’s interesting work that has a wide range of applications. The team mention remote sensing, airborne surveillance, and target recognition and identification. Indeed, the entire device is about the size of a large shoebox and so is relatively portable.

And Zheng-Ping and co say it can be significantly improved. “Our system is feasible for imaging at a few hundreds of kilometers by refining the setup, and thus represents a significant milestone towards rapid, low-power, and high-resolution LiDAR over extra-long ranges,” they say.

So keep smiling—they may be watching.