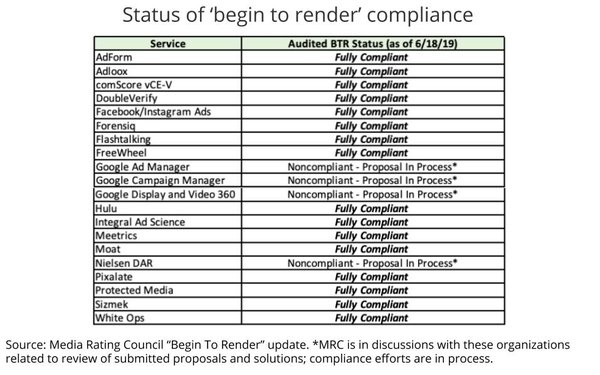 A year-and-a-half after the advertising and mobile media industry moved to a new, higher standard for crediting when a mobile ad “renders,” two of the biggest companies measuring the delivery of digital audience impressions — Google and Nielsen — still aren’t on board.

In a status update published this week, the Media Rating Council said 16 digital audience measurement services are now compliant with the industry’s so-called “begin to render” (BTR) standard, but Google and Nielsen still are not.

The “BTR” standard was developed by the MRC with the Interactive Advertising Bureau and the Mobile Marketing Association to provide a more valid measure of a mobile ad exposure than ads being served, and established a “grace period” and provided several extensions in order for digital audience measurement services to comply.

An MRC spokesperson said the council is continuing to work with Google and Nielsen and will continue to list them as being “in process” as “as long as steady process is being made.”

He added that the non-compliance status only applies to “display ad counting,” because “video counting has always been based on a method that requires measurement on begin to render.”