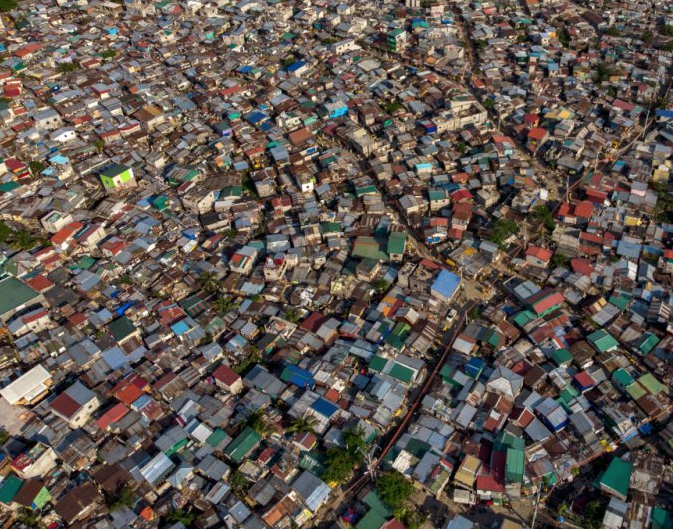 Megacities Are Not the Future. They Are Inhumane and Unsustainable

An aerial view of the BASECO Compound, Manila’s largest slum area, on April 3, 2020 in Manila, Philippines.

Chandran Nair is the founder and CEO of the Global Institute for Tomorrow, and his latest book is The Sustainable State: The Future of Government, Economy and Society. He is a member of the executive committee of the Club of Rome.

All cities have gone through the ebb and flow of social distancing and lockdowns, with regulations repealed as cases decline and hurriedly re-imposed when cases return. But few urban residents likely feel as dislocated as those living in Manila. The capital of the Philippines went through a three-month lockdown, starting in mid-March and ending in early June. Then, as residents started to return to work, a spike in cases in early August led the government to reimpose lockdown measures. Yet these measures were repealed merely two weeks later, as the economic pain of shutdown began to take hold—evidenced in a record 45.5% adult unemployment rate.

Manila is just one example of how the economies of megacities—cities with large and growing populations, often exceeding ten million—in developing countries have struggled to protect their residents and keep their economic engines running. It is an indication of the flaws inherent in an economic model focused on rapid and widespread urbanization. Megacities are not the future because they thrive on cheap labor and government policies fuel this abuse. Stagnant rural economies encourage people to move to the cities, hollowing out rural communities and leaving a hole often replaced by an increasingly concentrated and industrialized agricultural system.

Singapore, on the other hand, is a good case study of how even the most modern cities are vulnerable to those who they most rely on, and who they take for granted. In March, Singapore was being hailed as a model for beating the virus. Cases were low and the city remained open—until it was discovered that the virus was running rampant through the city’s migrant worker dormitories.

A girl covers her ears as people disinfect an area at the Babilonia favela, in Rio de Janeiro on April 18, 2020. 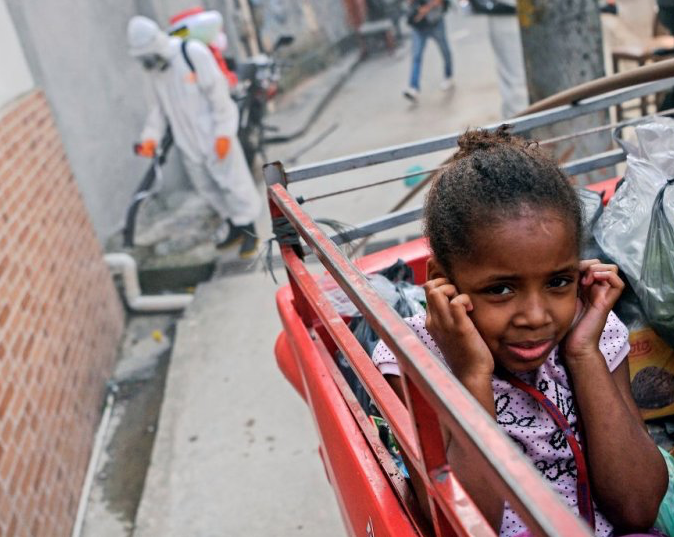 These are advanced economies with ample resources (though maybe not the political will to apply them universally). But with the prominent exception of the U.S., today’s COVID-19 hotspots are found throughout the developing world. In Brazil, favelas in São Paulo and Rio de Janeiro are organizing their own support networks due to the lack of adequate government infrastructure. Cities in Colombia have seen spiking death rates as medical systems collapse. One recent study in Mumbai’s slums found that over half of slum dwellers had antibodies for SARS-COV-2.

Some commentators have looked at the pandemic and asked whether the time of the “superstar city” is over, as the pandemic makes population density look like a danger rather than an opportunity for productivity gains. They’ve suggested that the pandemic may finally lead to an exodus from cities, as young professionals, fed up with the high cost of living and nightmare commutes, and freed by the shift to remote work, leave for rural communities.

But this idea is focused on advanced economies and, specifically, on the upper and upper-middle classes within them. In growing economies, mass urbanization will remain the focus, as it is still seen as the best, if not the only, vehicle for economic development, moving people from the “unproductive” countryside to the more productive cities. By emptying rural hinterlands with its demand for low-paid workers, this urbanization ultimately leads to more unstable, more damaging, and more unequal economies.

World economic growth in recent history has been centered on a few superstar cities: New York, London, Tokyo, Hong Kong, Paris and more recently Shanghai, for example. London makes up 30% of the UK’s economy, has 13% of its population and is more than eight times as populous as the country’s second largest city, Birmingham. So-called emerging markets have relied upon urbanization to drive growth. Turning rural labor into urban labor was seen as a positive for productivity.

But the pandemic has highlighted the inequality and unsustainability of these cities. A population of urban professionals, with safe and secure lifestyles, is supported by a large and poorly-paid service sector. These people work in the grocery stores, hair salons, restaurants, bars, and gyms, and live in poor neighborhoods or even slums. They deliver food, fix homes, cut hair, dispose waste, keep transport systems running, clean suburbs, look after children, and walk dogs. These underpaid workers have either seen their livelihoods evaporate in recent months, or have been forced to risk their health by providing essential services, because they do not have the choice of the privileged work-from-home crowd. After all, you cannot work from home if your job is keeping the hospitals working or the sewers in operation.

Residents wait to get themselves checked during a COVID-19 coronavirus screening in the Dharavi slum in Mumbai on August 11, 2020. 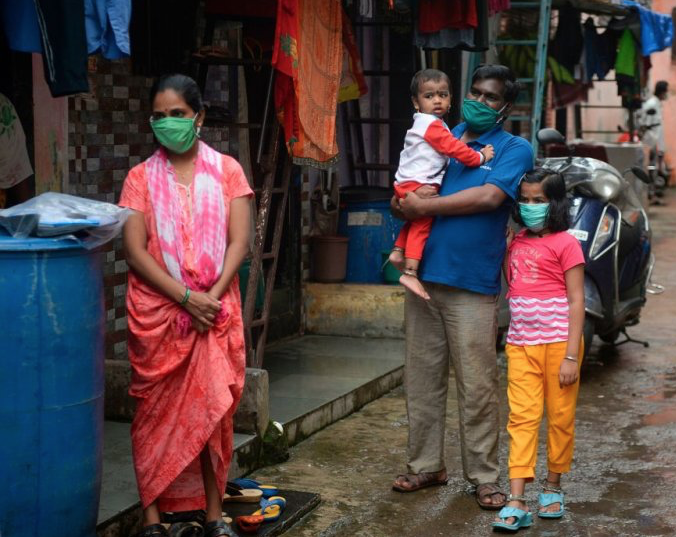 Even before the pandemic, these workers tended to live unstable lives. The high-cost of living in megacities forces many of them to live in slums or peripheral communities. The expansion of cities beyond the ability of infrastructure to cope means these communities have lower-quality housing, worse access to education, poor provision of electricity and clean water, bad sanitation, traffic congestion, dead spots for internet and mobile access, and “food deserts.” Worse, urban lifestyles are increasingly oriented around the so-called innovation of the gig economy: service workers now lack even the basic protections afforded to proper employees.

Yet in times of crisis, like the pandemic, these workers are seen as a disposable, redundant or even a threat. Without protections, they are unceremoniously expelled from the city. The lockdowns in India led to a huge and uncontrolled migration of day laborers back to their homes in rural communities—a reaction that almost certainly worsened the spread of the pandemic.

In addition, the massive amount of resources used to power urban economies have significant social and environmental effects on rural communities throughout the world. The effects of urban pollution and waste—from landfills to smog to dirty water—are also disproportionately placed on rural communities. Even when cities are sincere in their efforts to improve their environmental impact, they often ignore the ways they harm the countryside and the free ride they enjoy from the under-priced services of the hinterland.

An abandoned house is spray painted “Trump!” on August 14, 2016 in Schuylkill County, Pennsylvania. This Northeastern Pennsylvania region has a rich coal mining history, but the majority of nearby coal mines have closed. 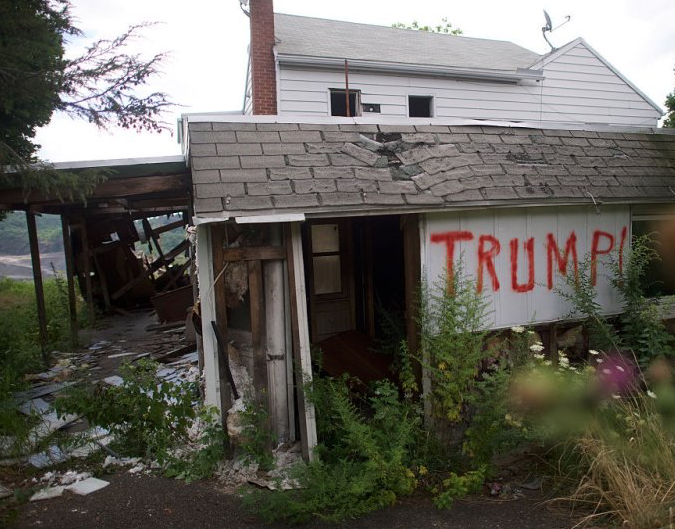 This leads to political discontent: a feeling that urban communities benefit from the resources and work of rural communities, while imposing rules and regulations on them. This is part of the background behind political phenomena like Brexit, the Donald Trump presidency and the rise of European populism.

Whether or not pandemic-driven de-urbanization happens on its own, governments should leverage this period to create a balance between urban and rural economies that is sustainable. While the impacts of remote work and other digital technologies are probably not as great as their promoters claim, it is true that they reduce the unique value that density provides and may finally dent the allure of large cities for white-collar workers.

Cities will always be useful to national economies, but they have grown into unmanageable Frankensteins. Yes, there really are some things that can only be done in a dense, urban environment but that does not mean turning a blind eye to growing megacities with over five million people. Countries probably don’t need the extreme urbanization we’ve seen over the past few decades, nor should we be strangely resigned to the notion that urbanization is inevitable and a net good. The time has come to rethink whether we should continue to place cities at the heart of our nations, turning them into large parasitic centers which practice economic apartheid.